you often get mails which makes your  heart delighted for a moment. but then if you see the proper content you will be shocked to know that these are just scams, some kind of the trap .

what is PHISHING:this is a trick by which hackers try to lead you to malicious or unintended link which would lead you to give away sensitive information .these email seems legitimate . authentic. but they aren’t .  see below examples of email i got :

below is the email that seems to be from YES Bank. i do not have an account in that bank .

look at the email address . it’s from some domain called educationation.pro .. is this an authentic domain name of YES bank. highly impossible . now if you desire to open an account and click on the given link , you will be redirected to malicious website which again may seem legitimate and you would give away sensitive info without your knowledge . 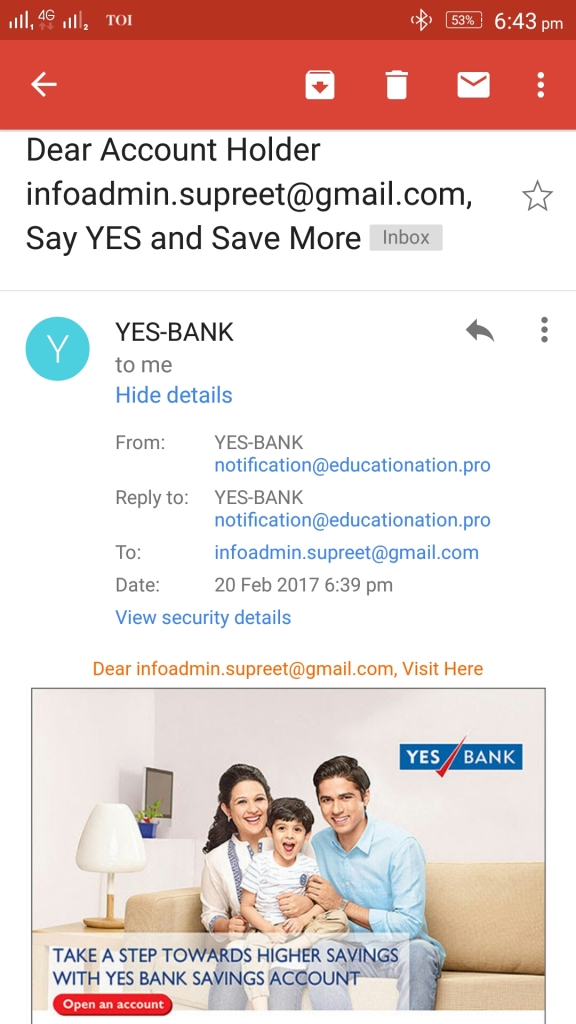 Look at the below email. i do not own credit card or i havent applied for any . but it says application is processed . how ??

observe the email id again ..shopatbest.com ? which bank is this ??? never click on any links given below .

wow state bank of india giving away gift vouchers of worth 5000 INR ?? why ??

i almost died laughing when i observed the emailid . it says findstay.in

since when SBI changed its domain to findstay.in … haha 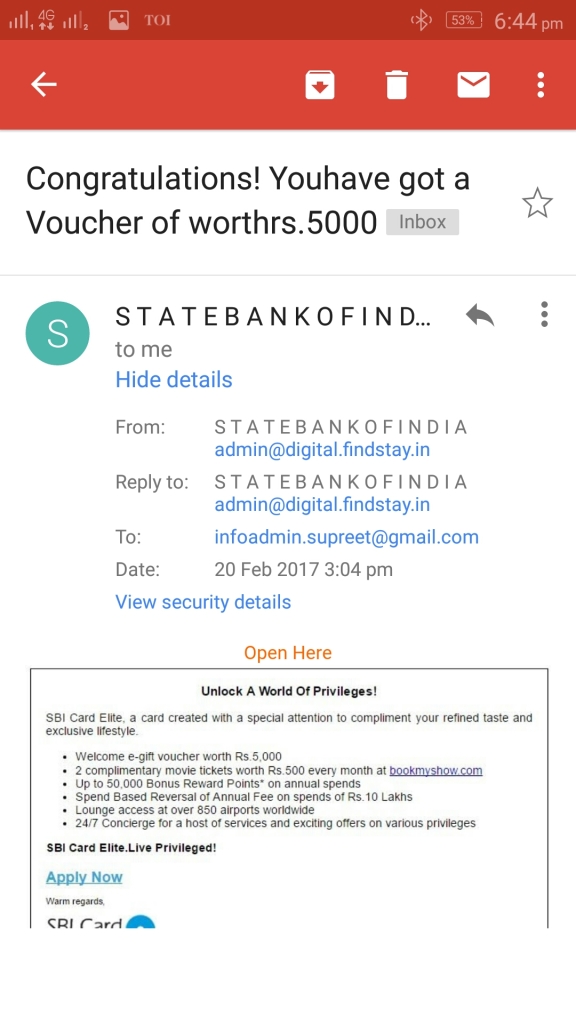 wow accenture is recruiting me ?? when did i apply again ?

i did apply but the interview process is already done . they even have my reference number .

but did you observe the signature below ? “Accenture in india” ???

so beware of these kind of attacks. and comment me back in the email if you have received similar mails and your views on how do tackle this .

have you ever thought how nice it would be if you have flash on the front camera of your phone ??  some android phone do have but majority don’t have. at least my phone dont have . so now as i unbox this tiny gadget i see a wonderful small  device which works as a selfie flash .

it has 16 led inside.all you got to do is plug-in this into your phone’s audio port ,switch on the device as start using it .

there is button to switch between high , low, and medium intensities according to your requirement .

this comes with a small USB cable to charge it. but you got to charge it for more than 1 hr.

this can be used in poor light situations to take photos and also use it as a torch if your phone doesn’t have one inbuilt .

comes in 3 colors (white, black and pink). i got black one.

overall pretty nice device for the money . i got this for around 250 INR(around 4$). hmm thats a cheap fix to have  front flash

here is how it looks.

below is comparision of how much difference it makes with and without using flash in a very dark place.

After all the research so finally i have started to record my Technical tutorials for my YouTube channel.

Below are my Tools used for Screen Recording

Audio: The best advice i received was to invest in some good microphone. and i stumbled upon BLUE microphone .

i got this elegant BLUE Snowball ICE microphone which is easy to plug n play .Cost:4200 INR 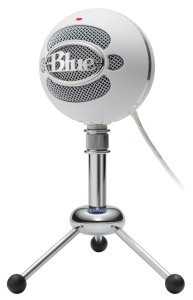 Screen Recorder : For now i wanted to get SCreenflow but ended up using Camstudio and Open Broadcast Software . (cost :Free)

As far as video is concerned i got this Logitech Webcam HD c920 from my friend which gives a decent Output .

Let ,me know if you have used any other tools for producing good decent videos .

I’m planning to start my YouTube channel .  I will be recording and sharing my technical videos over there.

I have been using VLC and camStudio   and windows movie maker earlier for editing .but  quality isn’t up to mark .

I’m asking help from all you YouTubers out there to suggest the best screen recorder and video editing software you have come across.Also which microphone do you use?. i currently use iBall but again quality sucks .blue yeti/snowball is too expensive for me .

I work as a technical lead, a software professional. I get these queries by many fresher often that which programming language do I choose so that I get the best opportunities ahead.

Now here is my take.

Language doesn’t matter as long as you are a problem solver.

I don’t mean you hop from 1 technology to another every month. what I mean is programming languages have objective but different approach or syntax to solve a specific problem.

All you have to learn is the fundamental concepts of any programming language and you will do good.

But believe me I have even tried node.js. I have worked extensively on SQL but I have also loved working on NOSQL databases like MongoDB, Cassandra.

A programmer should also be adaptive to new technologies.

If I were to hire a programmer, I don’t expect him to be an expert in xyz but what I see is his ability to adapt to new things. he will learn it himself eventually

When I joined as a fresher JavaScript was most prominent front end technology, as days passed on jQuery came in, knockout JS took over the market, Angular JS is now most preferred skill now for UI developers.

People expect you to be a super human instead of developer or jack of all trades.

What I feel is gain experience and expertise in certain technology and also learning multiple things isn’t a harmful thing.

You don’t have to be expert in everything if u ask me . be very good at one or two specific skills and keep yourself busy acquiring new skills . learning has become so easy these days with YouTube , udemy , simplilearn, hackerrank  etc .

I remember practicing on tutorialpoint.com which gives free terminal for practicing coding ..

Ok here are few skills you may like to start with.

I know it’s too technical post for non IT guys but I’m sure you get the essence of the post.

Should you have any similar queries, please do revert back.

it has been a wonderful journey . Lots of good article  i read . lot of things i learned from each of the fellow bloggers .

whenever i felt like writing, i wanted to share inspirational things, informative things . i tried to do so .

but now its time to deviate a little from this and concentrate more on my other work .

if anyone who works on ASP.net can visit my blog . but that’s on blogger.com

Thank you so much for reading my blogs . have a nice day

Way back in 2006 I wondered why people are so much acquainted with windows Operating system.

Ofcourse Windows OS have a UI which is popular for its ease-of-use feature.

I have been using UBUNTU Linux OS for quite a few yrs . It’s an open source OS and free of course added to list of FOSS.

A) Imagine a situation u have downloaded Ur bank a/c statement which in .pdf format.

With Linux, you don’t have to download and install Acrobat reader explicitly.

B) Imagine a situation where you receive a mail from friend which has images as an attachment and wish to morph it ,edit it ,add some effects.

With Linux being installed, u don’t have to install Adobe Photoshop separately. Gimp editor is already installed.

What i’m trying to tell is many such basic s/w like:

and many more are already available ready to use.

Linux OS is not vulnerable to Virus attacks.

It comes with 2 desktop environments

Package manager utility is available to install and update the  softwares .

Plenty of software available for download and install is categorized and consolidated in 1 utility called UBUNtu software center.

Why to get lost in the clutter?

Linux has option to toggle between multiple desktop workspaces. Even start menu is very well organized and categorised

Patches, fixes are made available at the faster rate.

I also could install some of the various windows s/w in Linux thru software called Wine. And even played many games

As far as I know OS takes care of defragmentation.

As a .Net Developer I was thinking how do I install visual studio IDE. Then I found an open source alternative to it . its called MONO develop.

All together I have come across many such good findings ,features of Linux. If have listed only fewof them above. People who have worked on linux can add on to it.

you can also share your thoughts via email -> infoadmin.supreet@gmail.com

Proud to be an Indian and an IndiBlogger